Why Settle For One?

To me, an ardent Yankee fan, the name ‘Phil Hughes’ spells promise. Ever since the Yankees started drafting more high-ceiling talent since 2004, Phil Hughes has been that promise that more home-grown Yankees were on the way. He’s shown stretches of that brilliance at the MLB level, but his story is largely yet to be writ. It’s going to be interesting and exciting watching Phil Hughes come into his own, hopefully as an Ace-calibre pitcher for the Yankees.

He’s even got a blog!

Of course, living in Australia, my sports fandom also extends to Cricket, and this summer I’ve become aware of another Phil Hughes that is knocking on the elite level of Cricket.

PHIL HUGHES didn’t really need a coach. After school each day from age 14 to 17 he’d just drag his father, Greg, down to the oval at Macksville and have him feed the ball machine. Phil knew which shots he needed to work on. Then he’d have Greg wait while he did his fitness program. Alone. Almost every day.

“If we’d had a big weekend away he might miss the Monday, and maybe some Fridays he’d have off,” Greg Hughes says. “But apart from that it was a daily ritual. It must have worked: he’s scored 53 hundreds so far.”

Phil had reason to work hard. Despite his tender years, he knew he had a rare talent. At 12, playing in a 50-over primary schools carnival final, he hit 159 not out, commanding attention similarly to earlier child prodigies Adam Gilchrist, Dean Jones and Michael Slater.

“That’s the innings that started off all the talk about him,” Greg says. “When Cricket NSW say they knew him from when he was 12, well, that’s where that started. It was probably also about when I first realised he could play.”

After that game Phil met Merv Hughes. Greg has a photo of the moment and marvels at the coincidence of his son meeting one of the men who now can control if or when he plays for Australia.

The thought of playing for Australia was first realistically conveyed to Hughes by Neil D’Costa, his coach since arriving in Sydney. D’Costa, who mentored Michael Clarke to stardom, planted the idea in Hughes’s mind that “in a few years Matthew Hayden is going to retire and you should make that position yours”. The pair have forged a solid link and mapped out a plan for Hughes’s career.

“We looked at how he would attack his rise in cricket with a mental and technical approach,” D’Costa says. “It’s working for him – look at how many people said he would fail in his second year. But I don’t see any second-year blues.” 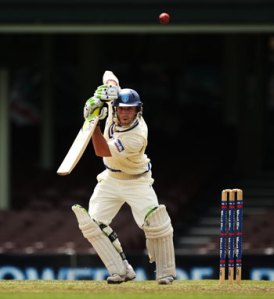 I started seeing his name in the last few weeks as my Google News kept spitting out this other Phil Hughes to the New York Yankee Phil Hughes. It’s a common name and I might have just ignored it; but even when I know it’s pure coincidence I want to ask what’s in a name? To top it all off The latter Phil Hughes it seems is a New South Welshman. Well damnit, I’d better be rooting for him too, especially if he starts opening for Australia. It’s not as if he’s a South African or a Kiwi or Pom! 🙂

So that’s my present for this Christmas. I get a second young Phil Hughes to root for in the coming years. I’m warning you all that if things get a litle confusing, well, you read about it here first.